‹‹ To infinity and beyond.
Lies must be fought with truth - Daniel Finkelsteim in The Times ››

Esmerelda Weatherwax
We live in hope.

A hearing into remarks made by Mayor of London Ken Livingstone to a Jewish reporter resumes on Thursday.

The inquiry began after Mr Livingstone accused a journalist of "door stepping" him and likened his behaviour to that of a concentration camp guard.

One charge of failing to respect others was dropped at an earlier hearing.

If found guilty of a second allegation of bringing his office into disrepute, the mayor could be banned from office for five years.

Please, please, ban him from office, 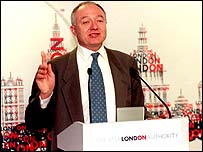 Marisol Seibold Looks a little tipsy in that photo!

And whadda maroon, to keep pursuing the "concentration camp" angle even after finding out the guy is Jewish!

If it makes you feel any better, the mayor of my hometown (Toledo) once "suggested relieving the problem of noise complaints from neighbors of Toledo Express Airport by selling homes nearby at low cost to deaf people." (Quote from Wikipedia) Never mind revitalizing the city during the 1990s; that's what he'll be remembered for for. Whoops!

Livingstone may be headed for a similar fate.

Mary Jackson Yes, Ken is an out and out bastard. I've just paid ?8 to drive through a very congested central London. Worse that that, arguably, is the way he sells out gay rights and women's rights in order to pander to the Muslim vote. And not even "reformist" Muslims like Irshad Manji. Sheikh Qaradawi believes homosexuals should be killed, disobedient wives should be beaten etc.