Esmerelda Weatherwax
To infinity and beyond.

This caught my eye this morning, from the BBC website (again).  The beeb has many faults but for a lot of things they are still one of the best news sources available, and this is one of those things.

A chartered surveyor is hoping to erect Lincolnshire's new flag at the North Pole in an expedition this April.

His team will be led by Nottinghamshire-based explorer Mike Thornewill, whose company Polar Challenge International is organising the trip.

The explorers' physical aptitude for the task was tested by dragging an old lorry tyre along a farm track for about a mile within a given time.

And Mr Pearce's training for the expedition has involved pulling a 60 kilo tyre with a make-shift harness made of his wife's riding equipment in his home village of Fulbeck. He has also been cycling and running.......

Mr Pearce, who has met the costs of his trip using his own funds, is aiming to raise £20,000 for Macmillan Cancer Relief and the Lincolnshire and Nottinghamshire Air Ambulance.
Read the article in it's entirety here.

Macmillan Cancer relief is a charity dear to my own heart. But what first caught my eye was the Lincolnshire county flag.  US readers will need to know that a County is a much more important regional unit in the UK than the counties into which your states are divided. The boundary rearrangements of the 70s apart they are centuries old, some date back unchanged to the Saxon Kingdoms of the 9th century. Certain former Saxon Kingdoms have had a shield as their emblem for many generations.  These feature the Saxon seax, not an axe, but a formidible notched sword. They look eastern but they are not. This was the weapon of choice for my ancestors, the freemen.

And recently several counties have designed flags which are proudly displayed.  The Cornish flag was adopted from the Saint of the tin miners, St. Piran. The black is said to represent the ashes of the smelting fires and the  white the colour of the metal.

The Lincolnshire Flag which it is hoped will be placed at the North Pole (or the bit of ice floating over the north pole at that time)  features a red cross with a fleur de lis in the centre on a blue and green background. A gold border represents the crops grown in the county. The blue on the flag represents the sea and sky of Lincolnshire and the green symbolises the fields, while the fleur de lys represents the City of Lincoln. 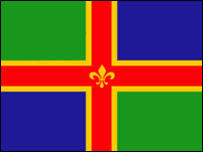 I wish him well.  This sounds barking mad, but within a fine tradition of barking madness.

Marisol Seibold Not being a fan of cold weather, part of me asks, "Why?" But the answer that immediately follows is arguably one that has driven the progress of many centuries: Because it's there.

The need to wander and explore is universal to some extent-- just think of all the technology designed to keep small children out of things-- but I think we've got something distinctly Western here. The pursuit of new horizons both in intellectual and physical spheres are inextricably related to one another, and are rooted in the Enlightenment via the notion that curiosity didn't kill the cat. (Maybe one, but anecdotal evidence is always shaky.)

No inshallah fatalism, or the laid-back brand seen in Chapter 80 of the Tao Te Ching discouraged (or failed to encourage) our predecessors from exploration, and innovation-- if not for personal gain, than for the sheer joy of discovery--because it's there. Thus, it's not surprising that voyages such as Pearce's remain a phenomenon peculiar to the West in general, and Britain (home of so many icons of the Enlightenment) in particular.

Then, while I'll pass on polar exploration, but a little barking madness from time to time is, as Esmerelda pointed out, a fine tradition, and one that has served us well:

greenmamba Mad Dogs and Englishmen go out in the Midnight Sun.

Mary Jackson Is the green in the flag anything to do with Lincoln green? (Sound, probably, of the "general ignorance" wrong answer alert from QI.)