‹‹ Having a wonderful time, wish you were here
Rule Britannia - not ››

Mary Jackson
Hoist with his own petard

Further to Esmerelda's post on Ken Livingstone, it appears that he has been found guilty of bringing his office into disrepute.

London's mayor has been found guilty of bringing his office into disrepute when he compared a Jewish journalist to a concentration camp guard.

The Adjudication Panel for England ruled Ken Livingstone had acted in an "unnecessarily insensitive" manner...

BBC London's Tim Donovan said it was likely the mayor would receive a reprimand at the very least for his comments to Evening Standard reporter Oliver Finegold.

He added that the maximum penalty was a five-year disqualification, although the board which made the complaint was not calling for that...

Here he is, looking a bit sheepish: 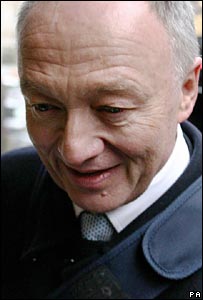 Generally I'm against political correctness and believe that, as long as violence is not incited, people, even Ken Livingstone, should be allowed to say what they like. But Ken Livingstone does not share my views. He has been a key player in the race relations industry and in building institutions dedicated to muzzling free speech in the case of other ethnic minorities and, of course, Muslims. So this really does serve him right.

john utting livingstone is a cunning and devious slimeball.like galloway he realised that by sucking up to londons muslim communities he could attain power and a lot of money.like galloway, he walks a tightrope between pretending to be gay friendly while courting islamic bigots.he is an upleasant loathsome creep and one can only hope that he will overeach himself and come to a sticky end. soon.lol john