New Duranty: Late on Sept. 6, 2005, a private plane carrying the Canadian mining financier Frank Giustra touched down in Almaty, a ruggedly picturesque city in southeast Kazakhstan. Several hundred miles to the west a fortune awaited: highly coveted deposits of uranium that could fuel nuclear reactors around the world. And Mr. Giustra was in hot pursuit of an exclusive deal to tap them. 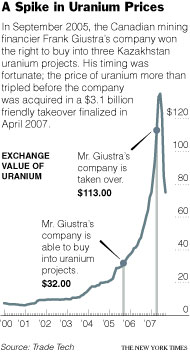 Unlike more established competitors, Mr. Giustra was a newcomer to uranium mining in Kazakhstan, a former Soviet republic. But what his fledgling company lacked in experience, it made up for in connections. Accompanying Mr. Giustra on his luxuriously appointed MD-87 jet that day was a former president of the United States, Bill Clinton.

Upon landing on the first stop of a three-country philanthropic tour, the two men were whisked off to share a sumptuous midnight banquet with Kazakhstan’s president, Nursultan A. Nazarbayev, whose 19-year stranglehold on the country has all but quashed political dissent.

The monster deal stunned the mining industry, turning an unknown shell company into one of the world’s largest uranium producers in a transaction ultimately worth tens of millions of dollars to Mr. Giustra, analysts said.

Just months after the Kazakh pact was finalized, Mr. Clinton’s charitable foundation received its own windfall: a $31.3 million donation from Mr. Giustra that had remained a secret until he acknowledged it last month. The gift, combined with Mr. Giustra’s more recent and public pledge to give the William J. Clinton Foundation an additional $100 million, secured Mr. Giustra a place in Mr. Clinton’s inner circle, an exclusive club of wealthy entrepreneurs in which friendship with the former president has its privileges.,,,

Submit Your Comment
Posted on 01/31/2008 3:48 PM by Rebecca Bynum
Permanent Link   |   Email Article   |   Print   |   Back to Top
Comments
25 Mar 2013 malpimigodo I have been exploring for a little bit for any high-quality articles or weblog posts in this kind of house . Exploring in Yahoo I at last stumbled upon this web site. Reading this information So i am happy to express that I have a very excellent uncanny feeling I came upon just what I needed. I such a lot indubitably will make sure to don?t overlook this site and give it a look regularly.| [url=http://instantonlinepayday.co.uk/]payday loans for bad credit [/url]

The most important part of the story comes at the end, and it concerns a three-hour meeting, at Bill Clinton's house in Chappaqua, with Mr. Giustra (the Canadian entrepreneur who befriended Bill Clinton, and flew him around the world, and to whose foundation he has committed $100 million, and Bill Clinton, in turn, helped him succeed in business (without really trying, or at least without really trying in the old-fashioned way) in Kazakhstan, not least by Clinton meeting with, turning on the charm for, greatly impressing for the sake of his friend Mr. Giustra, the ruler of Kazakhstan, Nursultan Nazarbayev.

Contacted by the writers of the Times piece, both Clinton and Giustra denied that any such meeting ever took place. Then, confronted this week with the evidence supplied by others, they suddenly both remembered such a meeting.

Now Bill Clinton does meet all kinds of people. Some come up to him, and shake his hand, at a White House ceremony, or at Davos, or outside the Grapes of Wrath bookstore in Vineyard Haven. And he can't remember them all. No one is expecting him to. But the meeting about which he had no memory at all took place at his house, and lasted a full three hours. If an important Kazakh personage visited you, and spent three hours alone with you and a fabulously rich Canadian businessman, and if he had his picture taken with you, and if all kinds of things had gone on in Kazakhstan, with you and with your new temporary  best friend that Canadian businessman, wouldn't you remember?

We all know the answer to that.

alfred Yep.  They sure did.  They still do.  Except I disconnected mine some time ago.  Via William F. Buckley.  Even as I disconnected any residual respect for the Muslim religion via Mr. Fitzgerald.  Once I thought, or assumed, rather, that it is just another religion, much like any other.

How stupid (idealistic) we Americans can be--thinking human nature comprises universals of basic goodness and decency.

Comes from Rousseau, I reckon, among other seekers of earthly paradise.

My "revered Oxford"? No such reverence. Family?links both ways.

As for Twain's Duke and Dauphin, how do they stack up to the Yazoo-type land-sale schemes, all puffery and fraud, the ones promoted by that brevetted Kentucky colonel in the American scenes of "Martin Chuzzlewit"?

alfred Shucks, 'taint nothin, Mr. Fitzgerald.  Just wait until the gruesome twosome move bag and their "we care about you-all" baggage into the White House.

And, don't you forget it, your revered Oxford gave one of those clowns a degree.  Lord A'mighty!

Mr. Bill Clinton has been graspingly grasping ever since he left office. Grasping,?but not at straws, unless those straws are of solid platinum, and bedecked with diamonds. Lecture fees from a half-million? to a million, or if it is a really??special cause, a charitable cause, a cause that will end poverty or something like it, a cause that is close to Bill Clinton's generous heart, then he might be wiling to accept only a few hundred thousand dollars for a speech and his numinous presence.

How much, that is, did Bill Clinton and his wife themselves contribute, out of the tens of millions he has taken in during the past eight years, to the Clinton This and to the Clinton That?

Go ahead. Round it off to the nearest hundred dollars. But we have to know.