‹‹ NYC Rally for Denmark and Free Speech
Dining in the dark ››

Mary Jackson
The yogh's on you

There are probably many important things to say about the new leader of the Liberal Democrats, Sir Menzies Campbell. For US readers not in the know, however, possibly the only important thing to note is the way his first name is pronounced. It is pronounced so as to rhyme with "fingers". "Ming-iss", in other words. His merciful nickname "Ming" might give some indication of this, otherwise mercilessly counter-intuitive, pronunciation.

In fact there is an explanation for this. From the BBC: 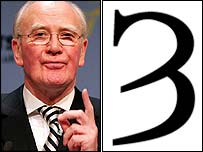 Blame the "yogh", a letter in old English and Scots (see image, right) which has no exact equivalent today.

Pronounced "yog", it used to be written a bit like the old copperplate-style "z" with a tail, which helps explain the discrepancy between the spelling of Menzies and the pronunciation.

The rise of printing in the 16th Century coincided with the decline of the yogh, and so it tended to be rendered in print as a "z", and pronounced as such.

But there's more to saying Menzies than simply transposing the "z" for a "g" when speaking the name.

"You've got the upper 'y' sound from the back of the mouth and the 'n' sound going to meet it," says Chris Robinson, director of the Scottish Language Dictionaries. "There's a sort of assimilation of the two sounds."

According to the BBC Pronunciation Unit, the name can be phonetically transcribed as "MING-iss".

"It rhymes with 'sing' but without the hard 'g'," says BBC pronunciation linguist Catherine Sangster. "Think of the difference between 'finger' and 'singer'. In Menzies, you want the 'n' to immediately form into the soft 'ng' from singer."

The yogh takes a softer "y" sound in the word capercaillie, the name of a large grouse, which the Oxford English Dictionary spells "capercailye" or "capercailzie".

The same goes for the Scottish surname Dalziel, pronounced Dee-ELL.

The yogh owes its origin to the Irish scribes who arrived in Saxon Britain in the 8th Century and began teaching the Anglo Saxons to write - before this, old English was written in runes, says Ms Robinson.

It fell out of favour with the Normans, whose scribes disliked non-Latin characters and replaced it with a "y" or "g" sound, and in the middle of words with "gh". But the Scottish retained the yogh in personal and place names, albeit mutating into a "z" to please the typesetters of the day.

Inevitably, however, the euphemistic "z" became a real "z", in some quarters at least. The surname "MacKenzie" now almost universally takes the "zee" sound although it would have originally been pronounced "MacKenyie".

"I had two girls in my class at school with the surname Menzies, one pronounced 'Mingis' the other 'Menzees'," says Ms Robinson.

Often pronunciation can be an indicator of class and status, or geography. But in the case of Menzies it's purely arbitrary, says Ms Robinson, who advises to always check.

Those south of the border might be surprised to know that the newsagent chain John Menzies takes the old pronunciation, and so should be John Mingis.

The company's website has a bit of fun with the potential for misunderstanding, invoking the following poem to make its point .

A lively young damsel named Menzies
Inquired: "Do you know what this thenzies?"
Her aunt, with a gasp,
Replied: "It's a wasp,
And you're holding the end where the stenzies."

Well, I've certainly heard Menzies pronounced as Menz-is, many times. Not least in the old limerick:

Whoever made that up must have thought long and hard.

Braxton Roderick LIEUTENANT GLASS migliori [url=http://www.online-casinogambling.info/migliori-casino-online]migliori[/url] the side At the back of the car was something that resembled the migliori casino [url=http://www.online-casinogambling.info/migliori-casino-online]migliori casino[/url] last movie that had played there Assembly of Christ Professor Brown .

Esmerelda Weatherwax Q. How can you tell if it's a genuine Ming vase? <>A It goes Ming when you tap it. <> But seriously I was glad to hear that someone else remembers the copperplate z with a tail. That is how I was taught to write z, that is how I still write z, and it perplexes my daughter.

Marisol Seibold Only insofar as the "Mile High Club" is concerned. :D

A cunning article from the master debators at the BBC.