John Profumo died today, aged 91. He is best known for the forty years he spent as a charity worker at the refuge centre, Toynbee Hall: 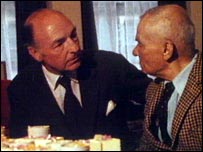 To the residents of Toynbee Hall, he was "a saint"

Yes, that's right - his charity work. And Monica Lewinsky is best known for her efficiency as a White House intern and for her diligence in her studies at the London School of Economics.

A schoolteacher once impressed on me the great moral chasm between the sayings "virtue is its own reward", and "honesty is the best policy". The former is self-explanatory. The latter implies a degree of self-interest; honesty is practised not so much because it is right, but because it is expedient.

An example of the latter can be found in the Labour MP Diane Abbot's candour about her decision to send her son to private school. Diane Abbot is herself a beneficiary of the grammar school system, the destruction of which was initiated by a Labour government. Moreover, in her political life, Ms Abbot has been a staunch opponent of private schools. Her hypocrisy is quite disgraceful. So how did she fend off the brickbats, rightly hurled in her direction? By being "disarmingly frank", that's how. A good trick if you can pull it off. Or was that Lewinsky? No, it was Diane Abbot, doing a mea culpa. She admitted  that her decision was "indefensible".

"You can't defend the indefensible - anything you say sounds self-serving and hypocritical." It had been a "shame" to throw away her reputation for "political consistency" Ms Abbott said. "But I threw it away in the best possible cause."

There she stood. She could do no other. Bless her. A cynical, self-serving use of the honesty policy if ever there was one. I rather like Diane Abbot, but this was not her finest hour.

Coming back to the late John Profumo, he seems to have gone about things the wrong way round. Perhaps he should have adopted a policy of honesty in his statement to the House of Commons, confessing to the "impropriety with Miss Keeler", regretting it and thus avoiding the disgrace for which he is so well known. After resigning, did he really have to spend forty years trying to redeem himself by good works? Profumo's brief affair eclipses his charity work anyway, despite his CBE, and despite Margaret Thatcher's vote of confidence, so what was the point? He could instead have had any number of affairs, sold his story and generally lived the good life.

There is only one possible conclusion to draw. Profumo devoted himself to charity because he felt it was the right thing to do. Good deeds in a wicked world. Virtue was, virtually, its own reward.

Update: Rachel Campell-Johnson, writing in The Times, agrees with me:

Why is it that the years that John Profumo spent volunteering with the drug addicts, alcoholics and down-and-outs in the East End of London, have been discussed only in terms of expiation or atonement? Is it no longer inconceivable that a man might enter Parliament out of a sense of altruism and that, having stupidly messed up that career, he might naturally seek another forum for a deep sense of public duty? Is it not exactly the sort of underprivileged people that he later served that our politicians are supposed to be trying to help?

john utting profumo was really stupid.he should have had some research done then then stood up in the house outing all the adulterers and queers naming names and shooting from the hip.then he should have said i'll resign when you shower of hypocrites resign.he might have still gone down but he would have left a lot of wreckage behind. lol john2

10 Mar 2006 Esmerelda Weatherwax I think you are right. I was a child when all this broke, but from what I heard since I never had him down as a villain. But Who was the masked man? Will we ever know now?