‹‹ Meet the man who invented book signings
Re: What President Bush should say to us, part 2 ››

Nasrallah is “sorry” for “the scale of the war” according to the BBC, who admittedly never met a lying terrorist they didn’t believe:

"Had we known that the kidnapping of the soldiers would have led to this, we would definitely not have done it," he said in an interview on Lebanese TV.

Of course, he means it. Just look at him. He’s all heart – he’s even pointing to it. 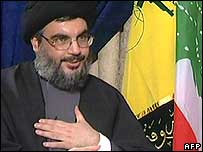 You’d buy a second hand car from this man, wouldn’t you?

We did not think that there was a 1% chance that the kidnapping would lead to a war of this scale and magnitude," Sheikh Nasrallah said.

"Now you ask me if this was 11 July and there was a 1% chance that the kidnapping would lead to a war like the one that has taken place, would you go ahead with the kidnapping?

"I would say no, definitely not, for humanitarian, moral, social, security, military and political reasons. “

Sheikh Nasrallah was speaking on the eve of a visit to Beirut by United Nations Secretary General Kofi Annan to discuss the expanded UN peacekeeping force to be deployed in southern Lebanon.

A force of 15,000 soldiers, 7,000 of them from European Union states, will be deployed to maintain the fragile ceasefire between Israel and Hezbollah.

The force will be led by France until February, at which time Italy will take command.

Israelis can be forgiven if they are less than reassured by this.

Rebecca Bynum It's like the Israelis are being experimented upon by some perverse mad scientist who refuses to believe the impossible is just that, impossible. Negotiating with Muslims is like the alchemist trying to make gold from iron. Won't work, will never work, never ever. There is no history of it ever working, but that does't deter anyone. They have a dream but that's all it will ever be.