‹‹ Kakutani: portait of the artist as a young jackass
I'm So Ronery ›› 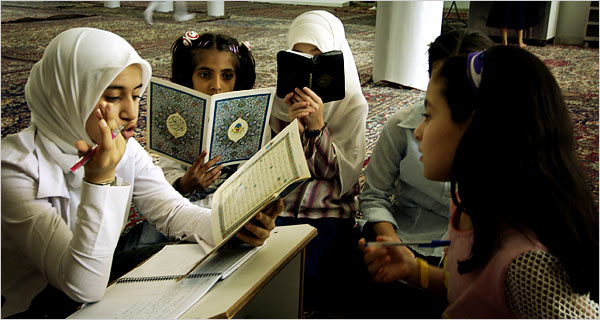 The New Duranty Times has the story:

Enas al-Kaldi stops in the hallway of her Islamic school for girls and coaxes her 6-year-old schoolmate through a short recitation from the Koran.

“It’s true that they don’t understand what they are memorizing at this age, but we believe that the understanding comes when the Koran becomes part of you,” Ms. Kaldi, 16, said proudly.

In other corners of Damascus, women who identify one another by the distinctive way they tie their head scarves gather for meetings of an exclusive and secret Islamic women’s society known as the Qubaisiate.

At those meetings, participants say, they are tutored further in the faith and are even taught how to influence some of their well-connected fathers and husbands to accept a greater presence of Islam in public life.

These are the two faces of an Islamic revival for women in Syria, one that could add up to a potent challenge to this determinedly secular state. Though government officials vociferously deny it, Syria is becoming increasingly religious and its national identity is weakening. If Islam replaces that identity, it may undermine the unity of a society that is ruled by a Muslim religious minority, the Alawites, and includes many religious groups...