Esmerelda Weatherwax
A small point, but telling.......to this cat lover.

I have written before so it is well known that I am not the biggest fan of Cherie Blair nee Booth, wife of our PM, human rights lawyer and frustrated judge.  Episodes like her arguing for that "dozy bint", the jilbab wearing Shabina Begum, or her greedy buying of houses and extortionate lecturing fees to pay for them do not endear her.

I hadn't picked up at the time that it was alleged that  her dislike of cats was the reason that Humphrey the Downing Street Cat had to be re-homed in 1997 shortly after Tony Blair became Prime Minister. Humphrey strayed into Downing Street in 1989 when Margaret Thatcher was PM. At that time he was believed to be about 1 year old. He remained during John Major's period in office and earned the title Chief Mouser to the Cabinet.  However after the Blairs went to live at number 10 he disappeared.

Rumours went round that because of Cherie's alleged dislike of cats the evil Alistair Campbell had him put down.  To prove that he was alive and well and living in Suburbia with a Cabinet Office official the press were invited to inspect him and take photos.  It has just been reported that he  died there last week at the ripe old age of 17 (at least)

Neither of them look very comfortable with each other do they? 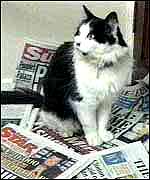 Proof of his comfortable retirement from 1997.

*   *   *   *
The practice of keeping an office or works cat to keep down mice has died out in the last 20 years. I know that one Midlands prison had a cat into the 90s, at another London prison the cats were rehomed when the use of sniffer dogs became more common and many officers blamed their absence for the mouse plague which followed. The small hospital where my mother was treated kept 2 cats one of which slept on the radiator outside her ward.  When the hospital closed due to NHS rationalisation the cats went too.  Health and Safety etc.  Then the cancer department of the big NHS Trust opened a family home style hospice unit and realised the value of a friendly, purring, strokable cat. And goldfish. And a parrot.
Cats are not for everyone.
But I like them.
Meow!

Marisol Seibold This is the first I've heard of the Downing Street Cat, but it's a wonderful story. It sheds a new light on Margaret Thatcher and John Major that Humphrey was allowed to stay.

Modern US presidents have made a big deal of their family pets; part of that is surely the pride in every pet owner that inspires them show off pictures (see below), but it's also a good political move that seems to have been lost on Cherie Blair:

There's a connotation of humility, of being down-to-earth, and in touch with the important things in life outside of one's position, in a politician having a family pet.

By contrast, we've all met animal-haters, and know what sort of personality accompanies that trait: shallow at best, callous at worst. And it sounds like Mrs. Blair has some PR trouble in that very department.

Lastly, I can't post a comment extolling the wonders of pets without a picture of my male head-of-household, Elmo. We've been inseparable since I got him as a 10-week-old kitten when I was 16, and he's about to turn 11. I like to think we keep each other young. ;)