Common sense from the House of Lords: 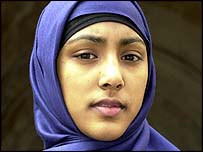 A school which was told it unlawfully excluded a Muslim pupil for wearing a traditional gown has won its appeal at the House of Lords.

The Court of Appeal had said Denbigh High School had denied Shabina Begum the right to manifest her religion in refusing to allow her to wear a jilbab.

But in a unanimous ruling, judges at the House of Lords overturned that.

They ruled there was no interference with her right to manifest her religion as she had chosen a school where such a policy existed.

Lord Bingham ruled that the two-year interruption of Begum's schooling was the result of her "unwillingness to comply with a rule to which the school was entitled to adhere".

This dozy bint and Hizb ut Tahrir stooge was prattling on the radio this morning about how her human rights had been denied. Yet Islam systematically denies full human rights to all women and non-Muslims.

Just imagine how much this case has cost the taxpayer. I am annoyed with myself for being grateful that she lost. It should never have come to court in the first place. Had she won, the implications for Muslim girls trying to break away from the constraints of their religion and their patriarchal families would have been disastrous. It would also have been an insult to the Hindu pupils at this and other schools. Hindus wear the colourful, practical and modest shalwar khameez. Muslims from the Indian sub-continent have also traditionally worn this, albeit with a headscarf. Shabina Begum is from Bangladesh, so this, rather than the Arab-style  jilbab, is the dress of her culture. She, and the brothers and Hizb ut Tahrir members who were pulling her strings, wished to emphasise the superiority of Arabs, as well as that of Muslims, over Hindus.

The House of Lords may seem like an odd institution to Americans. Yet on two occasions, this, and the mauling of the ludicrous religious hatred legislation, it has proved to be a voice of common sense. Long may it continue.

john utting tell the bitch to go and live in some middle east shitholeand she can wear the traditional shroud.she may not get an education though. lol john2

Mary Jackson Greenmamba - thanks for the link. Yes, on her own terms she is not a hypocrite. However, it is the terms that are unacceptable.

greenmamba "...was prattling ... about how her human rights had been denied. Yet Islam systematically denies full human rights to all women and non-Muslims." David Warren explains why she is not a hypocrite. http://www.davidwarrenonline.com/index.php?artID=569

22 Mar 2006 Turbinehead She will be pushed back under the stairs now and only brought out to do the chores. As for the legal profession including Ms. "I need the money" Cherie Boothe who earn their 30 pieces of silver trying to batter down the freedoms and traditions of the west at the instigation of Islamisists shame on you.

22 Mar 2006 Esmerelda Weatherwax As you can tell from the simultaneous double post this is a subject that has been causeing us much concern.
It is the right decision for something that should never have come to court.
Look on Denbign High School website at Shabina's fellow pupils, and the heanmistress and tell me that they are not modest, respectable and all the virtues. http://www.denbighhigh.luton.sch.uk/home.htm