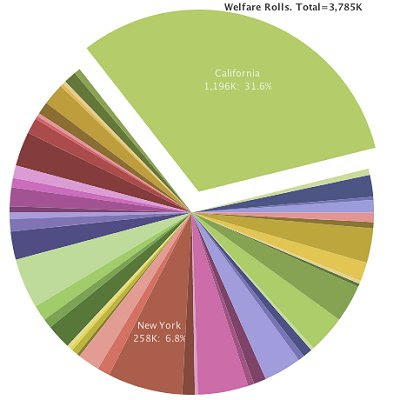 More Open Borders, More Welfare: This pie will give you indigestion; California (with 12% of the nation's population) represents 32% of America's welfare caseload. Chuck Devore explains, "California's share of the nation's welfare recipients has been soaring since Democrat legislators severely relaxed welfare rules and eligibility while hiking benefits around 2001. The result was as predictable for welfare as California's high taxes and heavy regulations have been for jobs and business." 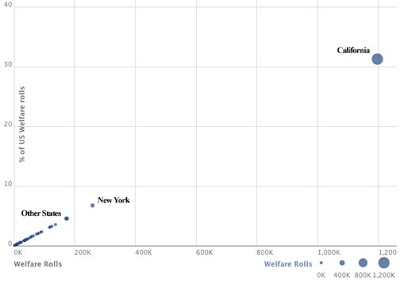 Even More Open Borders and More Relaxed Welfare Policies: While the Blue State of New York has its own bragging rights (highest per capita spending on welfare rolls), the distance between New York and the other states compared to California is like the distance between the Earth (other states), the Moon (New York), and the Sun (California). California is the only state that refuses to "seriously enforce the federal lifetime limit of 5 years of welfare for able-bodied adults."

California agribusiness started all this by insisting on having plenty of  very low-paid disposable workers. (If your back gets bad or your knees give out, hey pal, there are plenty more where you came from.)  It's not even that Mexican workers can make that much more in California than in Mexico anymore, but the combination of low wages and welfare is what makes the difference. Each Mexican family entering the U.S. costs taxpayers hundreds of thousands of dollars in welfare and services. There are not enough low-priced strawberries, oranges and lettuce in the world to make up for that. Plus there is a whole sub-culture in California made up of young native Californians who have figured out how to scam the system so they don't have to work.

More Nightmare: This AP story explains how the Federal government has spent $176 million in order to create 3,236 new jobs. Trouble is, the jobs only lasted an average of 35 hours each - that's $53,000 per job. Hummm.

Unfortunately, the $53,000 is how much it cost the taxpayer to "create" those jobs, not how much the people were paid for performing them.

"Plus there is a whole sub-culture in California made up of young native Californians who have figured out how to scam the system so they don't have to work."

Yes. That applies to unemployment benefits as well as welfare.  I spent a summer as a US Forest Service volunteer in northern California a while ago.  Some of the people there were summer volunteers from across the country, others were paid (all caucasian in my recollection) locals, mostly working seasonal temporary summer jobs in recreation and firefighting.  They did their work well enough, but more than a few had figured out that they could work part of the year, get laid off, and then collect unemployment benefits for the rest of the year.  What amazed me was that they were proud of this and bragged about it.  Laid off? No sweat. That was the plan.