‹‹ Get to the point
Damning with faint praise ››

Esmerelda Weatherwax
I have got a cartoon of Mohammed on my back.

My husband and I attended the March for Free Expression in Trafalgar Square London yesterday afternoon Saturday 25th March 2006. It was actually a rally as there was no procession.

We got there in good time to hear the first speaker Maryam Namazie who spoke on conditions in , her native and elsewhere in the world in such terms as to make us realise the importance of freedom of expression and the seriousness of any threat to it.  Thinking we had more time than we did we then popped away to get something to eat and check out other things happening just off Trafalgar Square and kept coming back to catch other speakers. In ’s Lane a Chinese group were handing out copies of the Epoch Times informing people of abuses in Chinese prison camps.  In the Strand a drum band urged us to “Wake up as is dieing”. Again a salutary warning of how precious freedom is.

So we didn’t see all the speakers. I understand from reading the posts of others who went that Peter Tachell (who I regret missing; I agree with very little of what he wrote that he was intending to say but anyone who has the guts to attempt a citizens arrest of Robert Mugabe has something to commend him) was commendably concise and that the unexpected speech by Labie Siffre was a bonus.  We heard Sean Gabb speak of his concern about how in the last few months people as diverse as Nick Griffiths, Abu Hamza, David Irving and Dr Frank Ellis had been disciplined in some way for expressing their opinion.

We even made it into one of the photos here; I won’t say which one, although most of me is thankfully obscured by a large umbrella.

There was a large contingent from The Secular Society.  I thought that the official slogans were worthy, but too wordy to be effective on the small placards. Two or three carried pictures of the cartoons. I understand that one of these was challenged but as I did not see this I cannot comment.  There were several placards urging that Abdul Rahman be freed but nobody mentioned the persecution of Christians in many countries at all.  There was no obvious British National Party presence, although I read on the blog later that several members claim to have attended in their personal capacity. They have the right to do so.

The crowd was good humoured, and the police relaxed.  There were Danish flags and some ladies in pink wigs and rabbit ears but the promised unicyclists and jugglers did not appear.  My husband spotted the best t-shirt afterwards in the warmth of the National Gallery.

On the back “Only kidding!”

On the down side turnout was low, I would have liked to see more information about the cartoons and more inspiration from the speakers.

On the plus side some of the cartoons were available to view if the effort was made.  Everything went peaceably and I do know of events with even smaller attendances. The BBC reported it and took the aims seriously.

As a first event this has potential.

And I had this exchange with a passer by.

"Freedom of speech" I said.
"Oh" he sneered, "another waste of time".
"Well" I said, "not while you retain the freedom to say so". 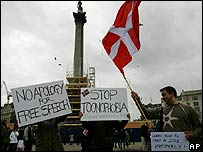