From the BBC today.

Polish author Stanislaw Lem, most famous for science fiction works including Solaris, has died aged 84, after suffering from heart disease.

He sold more than 27 million copies of his works, translated into about 40 languages, and a number were filmed.

His 1961 novel Solaris was made into a movie by Russian director Andrei Tarkovsky in 1971 and again by American Steven Soderbergh in 2002........

Lem was born in 1921 in Lviv in Ukraine and studied medicine there before World War II. He moved to Krakow in 1946.

He concentrated on science fiction writing, a genre regarded by the Polish socialist government as fairly harmless in terms of censorship.

However, his first major novel, Hospital of the Transfiguration, went unpublished for eight years until the ideological thaw that followed Soviet leader Josef Stalin's death in 1956.

I am not a huge science fiction fan, but I have actually read quite a bit, for the simple reason that so many of my friends were aficionados, and if I wanted something to read on the train Asimov, Niven and Alldis were readily available.  I bought The Star Diaries as a present for one friend and read it myself. And of all the strange books that I read during that period that is the one that sticks in my mind. Because it was a satire on the absurdities of trying to live in a totalitarian state.  As the title suggests the hero is writing about all the places he has visited in his little spaceship. Such as a world where the robots spoke Chaucerian English. That translated into English quite well and I had the advantage on my technically minded friends there.

Another time when he was stuck in a time warp and copies of himself at every age appeared every hour. He questioned the oldest "him" to find out how he got out of the scrape but "he" was too forgetful. Eventually three of the youngest and most mischievous "hims" mended the ship without him noticing. A city was run on the electricity generated by the children as they naturally fidgeted and jumped over the furniture.

Most profound was an underwater world populated by humans who breathed ordinary air.  In order to survive underwater they learned to hold their breath for long periods but had to keep making excuses to rise to the surface every half hour or so.  Elaborate strategies were developed to excuse these visits, while retaining the illusion that life underwater was fine and dandy.  Sound familiar?  Even I could see that it was an allegory of life under communism but isn’t it reminiscent of what we hear about another ideology that covers every aspect of life?

The Star Diaries seems to be out of print now in English in the UK and is only available (expensively) second hand. Which I think is a shame. 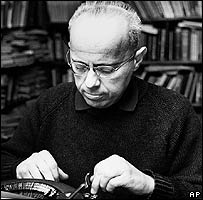