‹‹ Bostom to speak in NYC tonight
Shaming the capital ››

Esmerelda Weatherwax
Cock-a-doodle doo, the prophet has got my shoe,

Two linked stories from the BBC.

A cockerel in the Central Asian republic of Kyrgyzstan has saved itself from the pot after crowing what its owner claimed was "Allah", the Arabic word for God.

The two-year-old rooster was set to be turned into chicken soup after its owner, Ibragim Ismatullayev, found it to be extremely aggressive.

However, Mr Ismatullayev has said that as he put the knife to the cockerel's neck, the bird "screamed" and, on hearing this, his five-year-old son said "dad, it's saying 'Allah, Allah'."

The sound of the cockerel was then recorded on a mobile phone, and its life was spared. 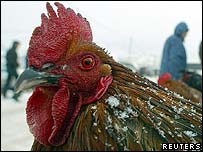 Read all about it and listen to the bird here.

The BBC then linked to this story, from Rawtenstall, Lancashire, which I missed in January.

A pet shop owner has found the markings on one of his tropical fish appear to spell the word "Allah" in Arabic.

An Asian customer spotted the markings on the astronotus ocellatus at Walker Aquatics in Waterfoot, Rawtenstall, Lancs, and offered to buy it for £10.

The customer bought the most expensive tank in the shop to house the fish, at a cost of £700.

Shop owner Tony Walker said he would honour the buyer's £10 offer but said he expected more interest in the fish.

The fish is also believed to have the word "Mohammed" in its markings on its other side. 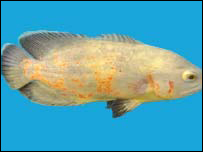 A fishy business in my opinion.

The grass is rise

Some say the bird is on the wing

Is on the bird?

Mary Jackson This story scales new heights in entertainment value. On the subject of the cockeral who cried Allah, I hope there was no fowl play.