‹‹ Rifqa Bary got her Christmas mail today and more
A Musical Interlude: Sweetheart, We Need Each Other (Ben Pollack Orch., voc. Scrappy Lambert) ››

Much is being made, apparently, of Grand Ayatollah Montazeri, because he had a falling-out with Khomeini (whose intended successor many say he was), and continued to look with dismay at some of the acts of Khomeini's successors. But was the real Montazeri, as opposed to the creature of hopeful fiction,  the rose and expectancy of the fair (future) iranian state, or was it simply a case of "he may not be the best in town, but he's the best till the best comes round"? Was Montazeri Sakharov, or was he simply Lenin, following Khomeini and Ahmadinejad's Stalin?

There are simiilarities between those in the Soviet Union and its satellite countries that became disenchanted with Communist rule, but who could not bring themselves to admit the whole thing was awful, had always been awful, and instead manufactured and then clung   to a myth of the Good Lenin, Ilyich the Good, and those Iranian dissidents who looked up to Montazeri, and now honor him, as part of their need to ask themselves the wrong question -- "where did the Islamic Revolution go wrong?" rather than insist on a forthright and grim recognition that "the Islamic Revolution was always wrong" because Islam itself needs to be checked, Islam itself is not an answer to anything in Iran. What is an answer is the secularizing spirit of those behind the 1906 Revolution, the first sign of liberalization and getting away from Islam in Iran, a country whose people, with their fierce pride in all the non-Arab (and non-Islamic) aspects of their history provides an alternative identity to that which Islam offers, and may yet save them.

Way back in 1919, Mark Aldanov wrote the first book-length study of Lenin, that monster, in French. See if you can find a copy of "Lenine," for if you do, you will discover that "wise, prim, charming Aldanov" had Lenin's number, and so did any number of other Russians in exile, way back when. And no doubt, aming the Iranians in exile, even those cheering the use of Montazeri by today's young and hopeful oppositionits, some of whom need  to remember the "good Revolution" before it "went bad," while others, more cunning, merely pretend to think that, as they become ever more intelligently secular, ever more disgusted not merely with the Islamic Republic of Iran but, as they in the end must, with Islam itself and all the ways that, in encouraging the habit of mental submission, and in inculcating the idea that all loyalty must be owed to Islam itself (the object of worship in Islam is Islam), it is responsible for the despotism that naturally is to be seen wherever Islam dominates, and  is taken most to heart.

reactionry
Alley Oop, Oop, Oops
Like Kirsie Alley, I might as well just stayed in bed getting my "beauty sleep," because I had intended to write "...a process now known as 'Vulcanization of rubbers'."

reactionry
Mad Mullah
Or: One Man's Mead
Is Another Man's Petroleum
Or: Root, Hog or Hajj
Or: Right Up Christie's Alley
Or: Christie's, Kirstie's, Wotevah
Or: Alley Oop Oop Talk Soup***
Thanks to the following video, with its expertly dubbed-in English provided by Britain's Rhodes Worrier, we in the West are gaining a more nuanced view of the man dubbed by many young, well-educated Iranians as "The Lord Humungus Montazeri" or "The Ayatollah of Rock 'n Rolla."  Montazeri's preference for negotiation over the application of brute force is shown in his confrontation with a band of Baluchi renegades.  His beardless followers could scarcely be confused with Iran's Revolutionary Guards and their outlandish accoutrements are well-suited for working behind enemy lines in Baluchistan's arid terrain.
The conflict arises out the rebels' distillation of, not only petroleum, but also the haram honey mead.  Though their province is rich in natural gas, its proven oil reserves are modest and it suffers from what some call a "Baluchistan boom, bust or boomerang economy."  Montazeri's "reasonable" demands are consistent with the well-known fact that while Iran is a major oil exporter, it lacks the refining capacity to supply its own domestic need for gasoline.
Given the massive intrusion into what is now Iran of Turkic and Mongolian invaders, some viewers have noted a strikingly "European" appearance of some of the participants in the video, but it should be noted that Farsi is a thoroughly Indo-European tongue.
Some reformers have been heartened by the video because it suggests at least a tacit acceptance of homosexuality, but others are troubled by the mistreatment of two rebel prisoners, comparing it to what previously occurred under the aegis of the late Shah's notorious SAVAK, named after an ancient Shiite, Saavik*, who is still reviled by some, and revered by others, for her pioneering work in contraception which led to the treating of sheep intestines with heat and sulphur, a process now known as "Vulcanization."*
One of Montezari's experts in sharia jurisprudence and author of the "reasonable man" doctrine, now, as was at one time, the Ayatollah Khomeini, exiled to France, issued a hog fatwa in which he proclaimed, "Because of the unclean manner in which they are procured, the law must concern itself with truffles."**
Perhaps the West, now stuck in what Hugh Fitzgerald calls, "the tar-baby Iraq," should consider relying more on, say, the tar sands of Canada and, with respect to all of Dar al-Islam, accepting Montazeri's reasonable, if not humanitarian and generous, offer implicit in "Just walk away."
http://www.youtube.com/watch?v=_TL4XZdyo3g&feature=related
*  Granted, she's now something of an antique, but it's been pure torture watching the result of Kirstie Alley living high off the hog; 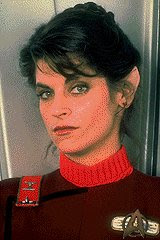