Rebecca Bynum
Is The White House Having a Red Christmas? 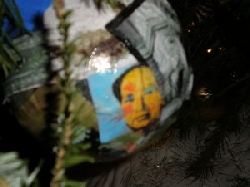 WASHINGTON, Dec. 23 /Christian Newswire/ -- The Christian Defense Coalition and Generation Life are outraged that an ornament of a man who crushed human and religious rights, trampled on freedom and oversaw the deaths of  50,000,000 of his own people would be honored by a display on the White House Christmas tree during this holy season.

If these reports are true, President Obama has shown a profound disrespect for Christianity and the message of the Christ-child which was heard so loudly on Christmas morning; "Peace on earth, goodwill toward man."

Both organizations are calling for the ornament to be removed and an apology to be issued by the White House to all people of faith, Christians and the Chinese people, many of whom are still in prison because of Mao's policies.

The attorney for Rev. Patrick J. Mahoney, Director of the Christian Defense Coalition, contacted the White House and was told that they could neither confirm if the ornament was ever on the tree or if had been removed.

This episode is especially troubling in light of the fact that President Obama covered up a white cross at Georgetown University and a symbol for the name of Jesus.  It now appears the President is continuing his disrespect and lack of sensitivity toward symbols and traditions of the Christian faith by insulting the birth of Christ with an image of brutal dictator on the White House Christmas tree...

The tragic thing is, I can't tell if you're joking.  That is a Warhol, and the rest, sadly, is plausible.

No, this story is absurd, for the picture in question is of Chairman Mao, but it has nothing to do with the East Being Red..It is far far worse than that. The picture of Mao is a print? by tricheur Andy Warhol. And ArtNews Forum reports that next Christmas, a small-scale copy of a Jeff-Koons balloon-dog will be used as a Christmas-tree ornament, on the direct orders of Michele Obama, and then, the year after that, plans have already been made to place right next to the official creche on the White House lawn a diorama, with a three-dimensional half-lifesize version of Tracey Emin's celebrated bedroom.

Forget about the Long March and the Kuomintang. What could be more subversive -- didn't the Tate say so itself, in awarding her its prize -- than Tracey Emin??

Does this sound plausible?