As predicted in  Hugh's post here.
From The Telegraph
A London mosque which hosted a speech by a hardline Muslim cleric earlier this year has said that it was “totally unaware” of whether it was used by syringe bomb suspect Umar Farouk Abdulmutallab.
Associates of the 23-year-old Nigerian said that he visited the East London Mosque, in Whitechapel.
MI5 believe that the suspect could have developed links with other extremists during three years he spent in Britain studying at University College London. They will investigate where he worshipped and whether he was radicialised in the UK or elsewhere.
The East London Mosque secretary, Ayub Khan, said that it was "appalled" by Abdulmutallab's alleged attempts to blow up a plane on its way to Detroit. But it could not confirm or deny suggestions that Abdulmutallab visited the mosque.
Earlier this year, the venue was criticised for hosting a pre-recorded talk by Anwar al-Awlaki, a radical cleric based in Yemen, who the US Department for Homeland Security said acted as a spiritual leader for three of the 9/11 hijackers.
At the time, the mosque said that it did not organise the event, and the group running it had hired out their facilities.
In a statement released yesterday Mr Khan, the secretary, said: "It goes without saying that the East London Mosque condemns in the strongest possible terms the alleged attempt to blow up a transatlantic airliner in the USA.
"The mosque has consistently spoken out against such acts, and will continue to do so.
"It is not the policy of the mosque to invite speakers who are at variance with this policy, and we try to ensure that those who hire out our facilities adhere to this principle.
"Given its community service to people of all faiths, the East London Mosque is appalled that it should be associated with such heinous acts. . . Over 20,000 people, of Muslim and other faiths, visit the mosque every week. . . We have no membership like a church and therefore cannot comment on whether this individual came to East London Mosque. . .
The Telegraph is factual. The dhimmi Independent on the other hand has a more sympathetic tone.
The radical worshippers who harm liberal mosque.
Umar Farouk Abdulmutallab, the young Nigerian accused of trying to blow up an American airliner on Christmas Day, visited East London Mosque in Whitechapel at least three times when he was a student studying at University College London – he graduated last June. He is thought to have already turned to fundamentalism during his schooling.
MI5 and Special Branch are searching through intelligence for where and when Abdulmutallab became set on his path towards violent fundamentalism. For worshippers at the mosque, the fear is that they are being judged as a community for the actions of one man.
"It's the implication that worries me," said Hussain Shefaar, a local primary school teacher and one of the mosque's trustees. "For all we know he came in a few times to pray because he was in the area at prayer time."
The mosque regularly issues statements condemning jihadism and long ago barred firebrand preachers such as Al Muhajiroun's Omar Bakri Muhammad and Anjem Choudhary. The trustees point to an £8m family centre under construction which will double the prayer spaces for women as testament to their liberal and inclusive leanings. They maintain that it is important to have an "open door" policy which allows in Muslims from all walks of life.
But it is this open door policy that has led critics to accuse the mosque of being soft on fundamentalist preachers. On New Year's Day 2009, for instance, a group unaffiliated with the mosque called Noor Pro Media hired a room inside the London Muslim Centre (the conference hall attached to the mosque) for an afternoon of lectures. One video lecture was given by an American-born, Yemen-based preacher called Anwar al-Awlaki, a rabble-rousing cleric with links to al-Qa'ida who has become a popular online sheikh for English-speaking jihadists.
East London Mosque maintained that it was not told that Noor Pro Media had invited al-Awlaki to speak and would not have allowed it. But there has been no move to forbid those who invited him from using the mosque's facilities again.
For New Year's Day, Noor Pro Media has hired a room in the London Muslim Centre and has another series of lectures planned. While there is no suggestion that al-Awlaki will appear by video (the Yemeni government claims to have killed him last week in an airstrike), those due to speak include Yassir Qadhi, a Saudi-trained preacher who has given a series of anti-Shia and anti-Semitic lectures. 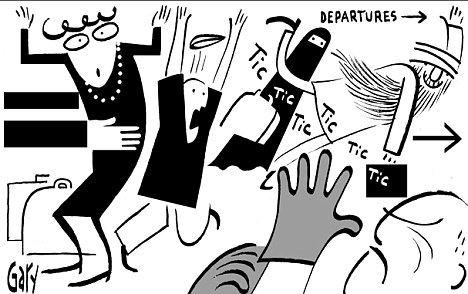 "The only surprise is that the BBC and the Guardian aren't already describing the Nigerian nutjob who tried to blow up a U.S. airliner over Detroit as 'British'"      (Littlejohn).

This should read "as in the Harry's Place post put up by Hugh..."?

I was the dutiful poster, but what I posted was written entirely?by the promisingly-named Lucy Lips and posted first at? Harry's Place.