Esmerelda Weatherwax
It's only rock and roll, but I like it.

Earlier this week I rather factitiously commented on one of the Samuel Becket items, indicating that the song Waiting for an Alibi by the rock band Thin Lizzy was rather more to my taste than Waiting for Godot.

Valentino's in a cold sweat, placed all his money on that last bet
Against all the odds he smokes another cigarette
Says it helps him to forget
He's a nervous wreck

It's not that he misses much 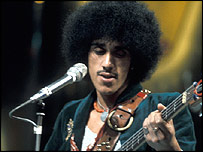 The lyric to that song has been going round my brain ever since.  I had a discussion with someone who knows about poetry recently, about how I find poetry that was meant to be sung or read aloud more accessible.  Although I did not have this in mind; at the time I was actually thinking of the folk songs of Ewan MacColl.

Unfortunately none of these appeared in the vote for the UK's favourite song lyric.  This was an unfair contest as the voters were given a selection of 100 lyrics to choose from.  Too many of which were from the Smiths.

I very much doubt that any line from this new song will grace a list of future favourite lyrics. World at your Feet by Embrace is the England World Cup 2006 anthem. Alternative title, Die Welt zu deinen Füssen as it has been suggested that supporters in in 6 weeks might like to sing songs in German to show that they appreciate their welcome. This is a football anthem that fails to mention the beautiful game.

Presumably With the world at your feet There’s no height you can’t reach is because you are standing on the world in order to gain height?  I have only heard the tune on-line so it may grow on me.  And the music industry has to take notice of my opinion. Mum rock is a formidable marketing force.

According to the Telegraph

Music industry figures show that album sales have risen 18 per cent in the past five years, with the over-40s now spending more than the under-30s.

Women are responsible for an ever bigger share of this market, in a trend that has been dubbed "mum rock". The artists benefiting from this trend range from young singer songwriters such as James Blunt and Katie Melua to old crooners such as Neil Sedaka, Barry Manilow and David Essex.

I do still like David Essex. The last CD I bought was a present for my husband, On an by David Gilmore. For myself I have replaced a cassette of Deep Purple's House of Blue Light, have some Spocks Beard lent to me by a friend who insists that I will love it, some Dave Swarbrick and 450 Sheep by Zdob si Zdub. No problem with the lyrics there. Dave Swarbrick is mainly instrumental fiddle and Zdob si Zdub sing in Moldovan.

As there are real musicians, and real poets on this site lets leave it there, for tonight.

Note Mary has expressed some interest in Zdob si Zdub.  They were the Moldovan entry in the Eurovision song contest 2005.  They play a lively punk/folk rock using some traditional instruments which I rather like. This is a link to their website.

Esmerelda Weatherwax Zdob si Zdub were the Moldovan entry to Eurovision last year. They play a rather enthusiastic punk/folk rock on modern and traditional instruments which I fould it quite liked so I bought their latest album.
I picked up White Teeth intending to buy it, but had a little browse through first. The book fell open at a bit where she was mocking "small men" who liked the music of other "small men" in bands like the Troggs and the Faces. Ie my fave raves from my own teens. It put me off so I have never read her work. So I can't really comment, other than to say she didn't appeal.

I'm with you on The Smiths. The most overrated crap since, er, Beckett, Brecht, not to mention Zadie- I'm really called Sadie, but Zadie makes me seem even funkier, talentless, if she wasn't black and female and pseudo-working-class nobody would give her the time of day - Smith.