From this morning's New Duranty Times: 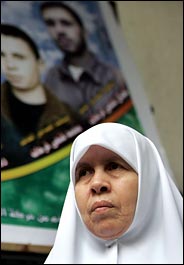 Mariam Farhat, [as expected, has won a seat in the new Parliament] the mother of three Hamas supporters killed by Israelis. She bade one son goodbye in a homemade videotape before he stormed an Israeli settlement, killing five people, then being shot dead. She said later, in a much-publicized quotation, that she wished she had 100 sons to sacrifice that way. Known as the "mother of martyrs," she was seen in a campaign video toting a gun.

Now she is one of the six women who are Hamas legislators, elected on the party list. The election rules had quotas for women for all parties. She was swamped this week at a Hamas victory rally at the women's campus at the Islamic University by young, outspoken, educated women who see no contradiction between religious militancy and modernity.

"She is a mother to every house, every person," said one of the students, Reem el-Nabris, 20, who kissed and hugged Ms. Farhat.

Ms. Farhat, 56, who had not been active in politics, said she hoped she deserved their praise as a role model. But she said her role should not be the only one for Hamas's women.

"It is not only sacrificing sons," she said after the rally. "There are different kinds of sacrifice, by money, by education. Everybody, according to their ability, should sacrifice."...

Billy Don Burns We must educate our people about the danger of Islam and women like Mariam Farhat. These people are on a mission to destroy all non-muslims. Can someone put the rest of the world on notice, we are at war. Thank God for people like Rebecca Bynum who keep us informed.