Esmerelda Weatherwax
At last - a Eurovision winner with a half decent guitar riff.

Did you see the Eurovision Song Contest last night? Do US readers have it broadcast in the US, you not being Europe?

Anyway it was won by F 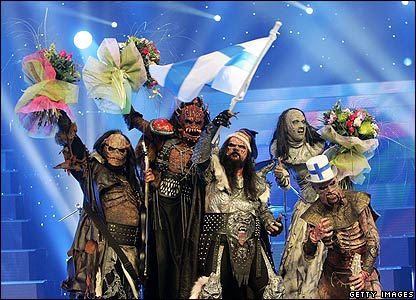 innish heavy Metal schlock/rock band Lordi with their song Hard Rock Hallelujah. Anything with the chorus Bring on the Arockalypse had my vote.  The band caused controvesy with their Hammer House of Horror makeup and were accused of satanism. Which when you look at the words of the song is quite the reverse. The song urges all creatures to turn from sin and follow the angels  out of hell. A sort of All creatures that on earth do dwell, sing to the Lord with Cheerful Voice, with flashbombs, power chords and an axe.

The voting was the usual happy neighbours fiesta. All the Baltic states voted for each other as did the Balkans. The UK entry was even worse than usual, a teenage rap with a chorus of St Trinians schoolgirls with mockney acents.

The Armenian song was not particularly memorable but got a good vote and it is good to see Armenia take a place on the European stage (I do mean the wider stage here) So far as the neighbourly voting is concerned they got a good reaction for Israel.

The Russian singer danced on his piano while les Sylphides floated around him. The Germans attempted Country and Western. Croatia's entry was barking mad. Called in translation "My High Heel" it featured lines which translated as "tick tock, it's half past two, your godfather was the devil, the grass is not sprouting, oy oy oy, hi, hi, hi! (in the original Croatian oj oj oj )

The Turkish entry and the Turkish presenter in Ankara both wore outfits that would get them stoned when they leave the studio. Nana Mouskouri announced the start of the voting then there was a celebration of 4000 years of Greek music, from Aristophanes and The Birds to Bazouki,  while votes were counted.

And Terry Wogan was as hilarious as ever giving the UK commentary.  All we need next year is a good song and a good singer. And look there goes a flying pig.

It's a good job you provided a translation; I'd have been lost otherwise.