Yesterday was the last Tuesday in January when the people of the Shetland isles celebrate their Norse Viking roots in the festival of Up Helly Aa. In its current form it is not particularly ancient being about 130 years old and dating from a Victorian interest in the Island’s Norwegian roots. The celebrations last 24 hours and as I write at 7.30 am GMT celebrating Vikings will not yet have made their way to bed. Today is a public holiday in the Shetlands, for obvious reasons.
The men and boys in the procession are called guizers and I find myself wondering if that is the root form of the London expression for man, geezer, as in the phrase, which sounds a little old fashioned now, 'es a real tasty geezer.
This is a report from The Scotsman. And pictures from the BBC. 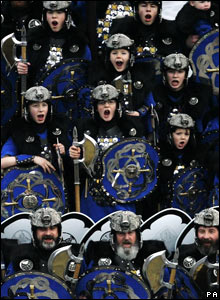 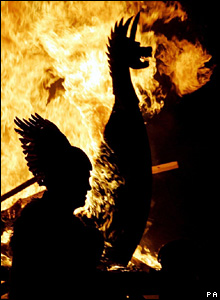 Reactionry Faced with underwhelming demand and the realization that it's both rude and presumptuous (for me, at any rate) to post something not at least accessible through Google's Language Tools, here's the translation:

Also, although I watched most of "The Virgin Spring," I should not pretend to know much about the works of Ingmar Bergman, having seen only a trailer for "The Seventh Seal." Its magnificent retelling in "Bill & Ted's Bogus Journey" was more my velocity.

Reactionry Not Such A Nice Nursery Tale

No 8 volume set here; just dog-eared Geipel: "...many decades after the old Norse language had died out in Shetland, riddles, curses and snatches of ballads in that language continued to pass from father to son and from mother to daughter. The lines:

whilst meaningless to an Englishman[but perhaps not to your motley crew - translation provided if requested] -and no doubt to the last of the Shetlanders to recite them - still make perfect sense to any Scandinavian....."

-And would be perfectly horrifying to modern day Scandinavians -for whom even spanking is not noble.* And if memory serves, horrifying after the fact to Max Von Sydow's character in Jungfrukallan, itself based upon a another medieval ballad.

If we must someday "get medieval" on Mecca and Medina, we should at least build a shrine upon the ashes; there's surely some springs around there.

*"Spanknobel"!? MJ is right; that ranks right up there with "Biggus Dickus". Perhaps it was based upon a privilege which may have persisted after the right of the first night had passed from practice.(which, if my Jr. high school Krautsprach teacher, could be believed, was as recent as her grandmother)

Mary Jackson If I had it I wouldn't sell it.

Interesting - to me anyway - that you have Bounty kitchen roll over there too. This probably means it's made by Procter & Gamble. It isn't the best. I prefer Thirstpockets - much stronger and more absorbent. It used to be called KittenSoft, but men stopped buying it.

If everybody who reads your posts at NER sent you just one sheet of Thirstpockets kitchen roll, it could really make a difference. But I suspect readers have this idea that you are in some way above kitchen roll and have no need of it.

31 Jan 2007 Hugh Fitzgerald If you had it -- the eight-volume 1962 editiion, liable to keep its shape for a bit longer than the original -- I would have made an offer. I need another copy for the pied-a-terre in the woods or on water that I hope one day to buy. But that day awaits the dawning, on some well-heeled readers of this site, that the best way to express gratitude for the profit and pleasure they derive daily from it, is to send a token of that gratitude for that profit, for that pleasure. Amazing how people can continue to assume that we who work for free somehow have the means to do it, so obviously don't need it, when those of us who must spend valuable time cliipping, not the coupons, of the rentier in the stories of yore, but those of the housewife, in the reality of today, all in order to save 35 cents here on a roll of Bounty, and a dollar off there on some Perdue chicken. Really: is this our, is this my, highest and best use? And all the other salti mortali that one must perform to stay afloat?

Mary Jackson I hope you realise that the first barrel of my surname is pronounced like the Cambridge college, not the Oxford one.

No, but I have Wright's Grammar of the Gothic Language. I'm the only person in my street to have this. My neighbours keep asking to borrow it so they can talk to the Goths and the Vandals who hang around near Camden tube station. Unfortunately, like a lot of my books, it's packed in a box underneath a lot of other boxes.

31 Jan 2007 Hugh Fitzgerald There are German rivers named Aa. There was the Dutch map-maker van der Aa, as prolific in his production as Most. There is the "aa" you utter on command for the ear, nose, and throat man with that tongue depressor. There is the famous Hidden Aa-Aa or Ha-Ha (depending on whether you choose to recognize a rough breathing mark), that played such havoc with the Viking horses at that Three-Day Eventing in which Harold the Red lost his ffrench ffooting on the Norman course.

31 Jan 2007 Hugh Fitzgerald Mary Magdalene-Jackson -- do you own Wright's English Dialect Dictionary? And if so, the original, or the 1962 reprint?

Mary Jackson "Geezer" seems a little old-fashioned now, though Paul Whitehouse revived it in the nineties in The Fast Show. According to Merriam-Webster and the free dictionary, it is the same word:

The English Dialect Dictionary defines geezer as ?a queer character, a strangely-acting person,? and refers the reader to guiser, ?a mummer, masquerader.? The citations for guiser refer to practices such as the following: ?People, usually children ? go about on Christmas Eve, singing, wearing masks, or otherwise disguised,? the last word of this passage being the one to which geezer is related.