AN INTERNET trail left by a British computer expert has led investigators to an intricate terror network spreading from the backstreets of Baghdad through cells of young militants living in European capitals to Islamic extremists plotting car-bomb attacks in North America.

For nine months police and intelligence agents in eight countries have patiently worked through a forest of e-mails and intercepted telephone calls that have so far led to the arrest of up to 30 men.

Most of these suspects have never met. They had no need. They were recruited, groomed by skilled propagandists and schooled in bombmaking via the internet.

The arrest of 17 suspects, many of them teenagers, picked up in the suburbs of Toronto at the weekend is said to be the latest stage in dismantling a terrorist nexus that, worryingly, has its links with one of the world’s most wanted men — Abu Musab al-Zarqawi, leader of al-Qaeda in Iraq.

On his website al-Zarqawi has encouraged young Muslims to take up the fight in their own countries and spread his religious war further than Iraq and Afghanistan.

One aim is to create an army of “white-skinned” militants, men born in Europe and America who can convert to Islam and become harder for the authorities to detect as they cross the world on their missions, including suicide attacks. Using skilled computer operators around the world, al-Zarqawi’s outfit passes on bombmaking manuals, advice on how to sustain terror cells and even ways to use credit card fraud to hack into vital internet sites

Note that "white skinned" militants bit, and consider how ineffective the white based mission statement of the BNP would be to counter that little threat.

So we don't have to be 6' tall and good at abseiling to be an effective warrior in this theatre of the war.  Eyes. ears and propaganda.  Counter dawa if you will. I believe that we are having an effect. This letter from the Times letter's page suggests so too.

Sir, Nx Hz (letter, June 6) seems to be suggesting that the Government is exaggerating the terrorist threat in order to impose some sort of police state — and he accuses others of paranoia! He also declares that he would “rather die free than live under the insidious creep of state authority”. Well, yes, so would I, which is why I hope the security services are doing everything in their power to counter a murderous ideology that would like to impose its own version of a police state, not just on us, but on the whole of Western civilisation.

I suspect that some of the public anguish that was present when Mr de Menezes was shot on the Tube last summer but seems so far to be absent over Mr Kahar is because Britain is becoming dangerously intolerant of Islam. 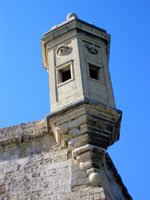 Trust your spider sense girl.  You feel in danger because you are in danger.  We all are.

To illustrate my point this is a picture of the Eye and Ear Watch Tower at Senglea Point in Malta. Decorated that way to symbolize unceasing vigilance.