‹‹ Sistani the Moderate
A strange thing ››

Good News from the Midlands. I was wrong, or more accurately, The Express and Star was wrong. Thanks to Luke for this link to the BBC.
A Muslim association has criticised a council's decision not to grant planning permission for a £6m mosque. 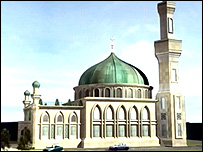 Dudley's planning committee voted unanimously to refuse outline permission. Thousands of signatures and letters of objection had been sent.
Khurshid Ahmed, chair of Dudley Muslim Association, said it was "very likely" to appeal and accused the council of going back on a land exchange deal.
The council said the land had been designated for employment purposes.
Mr Ahmed said it was not the end despite the decision on Tuesday.
The council's chair of development control, Tim Wright, said the land had been designated for employment purposes under the council's recent Unitary Development Plan (UDP).  "They have shown there would be 112 jobs, of which 37 were part-time.  In my opinion as a member of the development control committee I don't think they've justified providing sufficient employment. If we'd been asked to go away from the policy already, it almost seems a worthless policy."

Jeje My degree is in saocil anthropology, and I bristle every time that some right-wing scribbler uses anthropology, or for that matter sociology, as a code word for ideological nonsense. It only shows ignorance and prejudice Blame your fellow anthropologists for the low regard in which the field is held, because they let themselves be used by any number of pseudo-scientific peddlers of nonsense for the general crusade against the Church, against liberty, against civilization. The Kinsey Report, that notorious fraud perpetrated by a sexual pervert, because it was adorned in the glamor of science and anthropological and sociological research, had great influence during the sexual revolution, by the leading that same glamor and prestige to adultery and perversion, and making fornication seem as modern and scientific and shining an invention as the motor car. It does not show prejudice to mistrust a field with a long history of falsehood and folly. I mean no particular disrespect to your field: indeed, I expect philosophy to be held in the same contempt, because what modern philosophers have done to make the noble speculations of philosophy into word game and nonsense and wretchedness and wickedness certainly has stained the escutcheon of my clan as well. I also expect law to be held in contempt, since the judgments of the post-New-Deal courts have severed the threads once linking common law to common sense, and jurists degenerated from interpreters of the law to self-appointed legislators and ephors.