From The BBC.
Israelis have voted overwhelmingly for a song about nuclear annihilation as their country's entry in this year's Eurovision Song contest.
Push the Button is widely thought to be a response to Iran's nuclear ambitions and the Islamic republic's fiery president, Mahmoud Ahmadinejad.
Mr Ahmadinejad has called for an end to the Israeli state, though Iran insists its nuclear programme is peaceful. 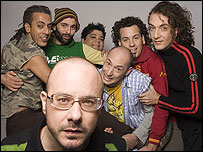 Teapacks, the song's performers, say it is their role to stir up controversy.  "The idea is to do something that crosses the accepted norms," singer Kobi Oz told reporters.
The group was picked as Israel's contest competitor earlier, and they offered up four songs to the telephone-voting Israeli public, which overwhelming chose Push the Button.  The lyrics are sung in English, French and Hebrew and the music fluctuates between folk, rap and hard rock themes.
The world is full of terror, if someone makes an error, he's gonna blow us up to kingdom come.
There are some crazy rulers, they hide and try to fool us, with demonic, technologic willingness to harm
Another of their songs was the facetiously titled Salam Salami, so-named after the group discovered that its original lyrics, with words taken from the Bible, broke Eurovision Song Contest rules on suitable content.
The song appears to reflect a widespread Israeli view that Iran's nuclear programme is a threat to the Jewish state's very existence.
In October 2004, President Ahmadinejad made a statement in which he envisaged the replacement of Israel with a Palestinian state.
The contest will be held in Finland in May.
Update. First the good news. Thanks to Drunken Blogging I have a link to the band performing the song here. The song is quite catchy.They feature a plump, bearded, bespectacled, pipe smoking accordion player. He plays the accordion much much better than I do, and I do not have a beard, or smoke a pipe, but otherwise I feel an affinity....
And the bad new is that this song may also be banned.

drunkenblogger I really do like that song. It has a certain je ne sais quoi!

Sounds great in the French.. whatever he's saying!