‹‹ Why Condi must go
Morning funny ››

Abu Hamza, aka Captain Hook, didn't always look like this: 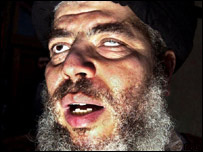 According to Valerie Fleming, his ex wife and therefore the woman responsible for his being granted indefinite leave to remain in the UK, he used to be a bit of a looker. From The Times:

"26 years ago Valerie Fleming fell in love with a handsome, romantic young Egyptian.....a romantic, gentle, 22-year-old Westernised student......He was a romantic man, quite tender, and soft spoken.....She turned him down because she had noticed that he attracted a lot of female attention. ...“My answer was ‘no’ because there were a lot of women around him. There was one woman called Tracy who fancied him and she kept trying to get in the way. She was determined to get him. She would always come over and keep him company,” ..... “There were women after him all the time. You would see them hanging around the lobby of the hotel”

Perhaps, in a reverse of the Oscar Wilde story, he has a picture of himself in the attic looking gorgeous.

Mind you, to judge from the article, Valerie is not the sharpest knife in the drawer. Perhaps her eyesight is defective too.

Incidentally, "hamza" is Arabic for "glottal stop". He certainly uses plenty of those, just like your average Cockney, but this didn't give him enough streed cred with the jury to get him off the hook. Guil'y, mate. You're going dahhn.

Update: talking of drawers, according to the London Evening Standard, shortly after Valerie and Hooky first met, at the hostel where she worked, he "kissed her in the kitchen area". This recalls Jack Lemmon's indignant Daphne in "Some Like it Hot" complaining that she had been "pinched in the elevator".

john utting i see that hamza and his buddies went on hunger strike this week because the food wasnt to their liking.however it only lasted about one day.the fat bastard should be fed on bread and water and made to buy any extras out of his own money.sorry i mean the british taxpayers own money. loljohn 2

john utting hamza claims to have lost his arms fighting the russians in afghanistan.i think thats bullshit ,i think he was punished for thieving under shsriah law.his eye?probably lost it brawling in his nightclub bouncer time in london when drinking and womanising were his thing lol john2

10 Feb 2006 Esmerelda Weatherwax This is a little saucy but shows that I am not alone in the way my mind works. Although not in front of the vicar. originally poster by werter on JW, and from that bastion of British good tase, the Currant Bun. http://www.thesun.co.uk/article/0,,2-2006060507,00.html

9 Feb 2006 Esmerelda Weatherwax It looked better in lines and paragraphs but they didn't come out. Wah! :-(

Mary Jackson Good job the poem wasn't about the semi-colon, or there would have been all hell to pay.

8 Feb 2006 Esmerelda Weatherwax Were it not so serious there is much here worthy of a Carry On film. His real name ? Mustapha Kamel (I simply must have a camel, a mule will not do!) The girl Tracy fawning over him. Was she egged on by her friend Sharon? And where did he lose his hands and eye? There is a short story by (I think) Somerset Maughan about a Latin American revolutionary who is about to be executed by firing squad. And at last the waiting journalists hear the truth about his dramatic scar. When he was an apprentice revolutionary a lemonade bottle exploded in his face. When Joseph Vissarionovich Dzhugashvili needed a revolutionary name he picked one that means Man of Steel. Very manly. Hamza picked a name in jihad which means glottal stop. Surely he didn?t have in mind Andrei Voznesenski?s poem The Ballad of the Full Stop? ?A ballad? A ballad of the full stop? The knockout drop? You dope! What about the bullet that punctuated Pushkin! O the winds whistled as through the stops of clarinets Through the perforated heads of our best poets. Zinged on their course past oppression and piggishness On a whistling trajectory hurtling down to posterity! There was no full stop. It was all a beginning. We go down into earth as through the gates of a railroad station, And the O of the tunnel is black as a muzzle? What?s the place we are heading for? Immortality? Oblivion? No death. No final dot. There?s the path of the bullet- A further propulsion of the same projectile. Our sentence in nature has no period. We shall be deathless. And that?s my point. Yours in counter dawa Desdaemona Dipthong