‹‹ Daring raid on a Taleban stronghold
The Jizyah keeps flowing, and flowing ››

Esmerelda Weatherwax
See football and needlework do mix as hobbies !

This is from the BBC.

When England's travelling band of supporters arrive in a city for a match they find a suitable spot and hoist flags and banners carrying the cross of St George in their dozens. It is not just a takeover of a town square, but a world of intricate stitching, washing superstitions and well-travelled flags.

The flags show supporters' allegiance to their club as well as their country. A cosmopolitan mix of team names is emblazoned across the red horizontal stripe - from Premiership clubs, through the lower leagues down to fans' pub teams.  The four white squares are filled with crests, mascots, initials. Their condition hints at how long they have been on the march with England. For something packed away in a bag and carried off to the football, many of them are fantastically intricate examples of creative stitching.

Two weeks of hard work with a needle and thread went into Paul Green's flag. "Wisbech, near Cambridge" is sewn across it in huge letters and the clue that he is a Norwich supporter is in the giant canary.

Dave Russell, from Basingstoke, aka Dave from Baze, has family to thank for the detail on his Wolverhampton Wanderers England flag.  "I'd been meaning to get a flag for ages but got drunk one night and ordered it on the internet," (as men do, tell me about it!) he says.  "To get the wolf, my Auntie Brenda butchered an old flag and put it on there. It looks awesome."

...opinion is divided over whether to wash, or not.  Dave is happy to put his in the machine. "You should have seen the state of it the other day. I'd taken it down and it'd fallen in to about eight beers. It's really good quality and it doesn't run in the wash."

... fans who have witnessed a victorious streak with their flag are less keen on the idea.  "We're a bit superstitious as we've had a winning run with it since not washing it," say England and Bournemouth supporters Justin and James Noakes. "It's got some stains on it but we've always looked after it."

Others say a tumble in the machine happens in only the most extreme cases, "like if the flag gets a hot-dog and sauce all over it".

Like the trip to the tournament itself, the flags cost a fair amount - up to £200, for a large size, with a club side's name on.  Other fans have been more canny - Mickey Booth, Reg Bailey, Matthew Pearson and Adam Armitage, from Grange Moor, Yorkshire, have carried their flag since France '98. It is "a proper flag, with proper original rope and real paint for the words" they say.  But having come from its original post flying on a mill that closed down, it was also free.  It has cost the men enough to be here and as Reg underlines: "Truth to tell, we're all Yorkshiremen, and we don't pay out much money for things." 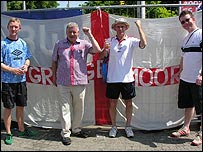 I'm married to a Yorkshireman, and while they joke about being mean its not true.  They will spend their money and generously so, but they won't waste it.  These gentlemen seen to be having better luck washing Aunty Brenda's handiwork in support of England than I have.  Not liking any of the "womens" England t-shirts available in my size I decided to make my own.  I got a comfortable white t-shirt and stitched red ribbons of satin, velvet and organza in a tastefully off centre St George Cross across the front. I wore it on a few match days and received several compliments.  Worried that the red ribbons might run, and mindful of the tea, beer, and cereal stains that by now also adorned the front I decided that a careful hand wash was required. The stains came off with use of a nail brush and a bar of trusty green fairy soap. The ribbons didn't run and I hung it over the bath to drip. Except that the red thread I used did run, seeped onto the back. So I now have a bold satin, velvet and organza cross on the front, and a pale imitation on the back.