z - all below inactive
Coming soon to a fleapit near you! (Hopefully not)

There I was reading the obituary to Akira Ifukube, who composed the music to the Godzilla films and who has just died at the age of 91 when out of the corner of my eye I spotted this.  It sounds like a pleasant afternoon of family entertainment.  It seems to be a big hit in Turkey but I doubt it will do Billy Zane's career much good.  I think I will enjoy King Kong v Godzilla more.

It is rabidly anti-American, and it is the biggest draw in town.

With a budget of $10m (£5.7m), Valley of the Wolves Iraq is the most expensive film ever made in Turkey - and it is pulling record crowds.

At one of Istanbul's biggest multiplex cinemas the blockbuster is showing on five separate screens and nearly all the seats are sold out. It's the same story across the country.

"I'm back to see it for the second time already," says one student, waiting impatiently outside Screen 10.

"It is anti-American, but we already know what they've done in Iraq. That's the reality. Now we can see it on screen." 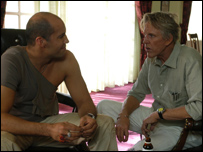 The movie opens with a real-life incident: the arrest in July 2003 of Turkish special forces in Sulaymaniyah, Northern Iraq.

The soldiers were led out of their headquarters at gunpoint, with hoods over their heads. America later apologised, but it appears the offense ran deep.

At the time Turkey took the incident as national humiliation. In this film the fictional hero sets out for revenge.

From then on, the action pits good Turks against very bad Americans in a mix of fact and fiction with a deeply nationalistic flavour.

In one scene, trigger-happy US troops massacre civilians at a wedding party.

In another they firebomb a mosque during evening prayer. There are multiple summary executions.

And for the first time, the real-life abuses by American soldiers at Abu Ghraib prison, are played out on the big screen.

Even the doctor - played by Gary Busey - is evil, removing human organs from Iraqi prisoners to send to patients in the US, Israel and Britain.

"Our film's a sort of political action," explains script-writer Bahadir Ozdener at the production company's stylish office on the Asian side of Istanbul.

"Maybe 60 or 70% of what happens on screen is factually true. Turkey and America are allies but Turkey wants to say something to its friend. We want to say the bitter truth. We want to say that this is wrong."

In a mainly Muslim country that has enjoyed a long strategic partnership with the US, Valley of the Wolves has sparked intense interest.

The US ambassador to Ankara was quizzed for his reaction to the film on a major news channel; even Turkey's foreign minister has felt moved to comment on it. Both were anxious to appear conciliatory.

But the film clearly capitalises on a wave of anti-American feeling that peaked with the Sulaymaniyah controversy, but began to swell with preparation for the invasion of Iraq.